Thank you for visiting this site.

This site is for discussion of new ideas to advance and unify Psychology as a natural science. Both are only possible by taking risks.  To borrow a quotation from Chuang Tzu: “Leap into the boundless and make it your home! *

This is the first in a series about the General Theory of Behaviour (GTB).  The aim is to reintroduce Psychology to Natural Science.  I am proposing here that an established principle in Physiology – Homeostasis –  can be applied equally well to unify and integrate Psychology – Psychological Homeostasis. Everything here is a work in progress and subject to revision.

A universal drive for equilibrium, security and stability in living organisms in their interactions with the ever-changing external environment.

To be clear, this is not the same fuzzy concept of homeostasis applied in Family Therapy in the 1970s and 80s.  That has long since been demolished by critics  James C Coyne, Barbara J Anderson, and Paul F Dell.   The latter described the family therapy version as follows: “homeostasis is an epistemologically flawed concept that has repetitively been used in the service of dualistic, animistic, and vitalistic interpretations of systems.”  The current use of the construct is none of these things.

The construct described here has totally different origins in the laboratories of scientists like Curt P Richter (1954), the Eisensteins (2006), and Woods and Ramsay (2007).  We start with something fundamental and return to basics.  We end with some astonishing new brain research indicating that the General Theory is fully consistent with contemporary Neuroscience.

The General Theory of Behaviour

In a unique new approach to Psychological Science, there are 20 principles and 80 empirical propositions.

Here are twenty foundation stones of the General Theory of Psychology.

Principle I) Agency: The voluntary behaviour of conscious organisms is guided by universal striving for equilibrium with purpose, desire and intentionality. 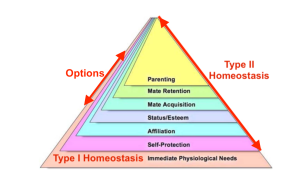 Principle III) Communality: Homeostasis of both Types I and II is controlled by a single executive controller in the forebrain.

Principle V) Entrainment: The internal CLOCK controls physiological and behavioural processes in synchrony with regular changes in the environment.

Principle VII) Law of Effect: (A) All voluntary action is determined, at least in part, by the degree of pleasure or displeasure that the action provokes. (B) Any behaviour that is followed by pleasant consequences is likely to be repeated. (C) Any behaviour that is followed by unpleasant consequences is unlikely to be repeated.

Principle IX) Consciousness: Consciousness is the central process of the brain that builds images, sets goals, predicts the future and executes voluntary actions.

Principle X) Mental Imagery: A mental image is a quasi-perceptual simulacrum that includes a goal, schemata, affect and action.

Principle XI) Niche Construction: Any conscious organism strives to enhance the safety, stability and occupation of the socio-physical environment for itself and other organisms under its protection.

Principle XII) Symbiosis: In a symbiotic relationship, each participant experiences an ‘extended self’, a shared set of perspectives, resources and identities in a common pool.

Principle XIII) Emoting: Emoting is rooted in feelings, cognitive appraisal and perceptions. Emoting is artfully constructed to maximise the likelihood of attaining one or more sought-after goal(s).

Principle XIV) Self-Control: Acting as an agent of Type II homeostasis, self-control is one measure of a person’s ability to attain safety and stability, and is predictive of later achievement.

Principle XV) Comfort vs Discontent: In every conscious being exists a tension between comfort and discontent. When the discontent is assuaged, there is comfort. When comfort is resisted, there is discontent. Resolving this conflict is a primary function of Type II homeostasis.

Principle XVII) Sleeping and Waking: (A) Sleeping and waking are controlled by Type I homeostatic sleep pressure, and the circadian CLOCK in coordination with the Behaviour Control System (BCS)* and Type II homeostasis.  Any of these three processes can override any other but increased sleep pressure, in combination with the CLOCK, ultimately will always produce sleeping. (B) The BCS coordinates the REF, CLOCK, AAI and action schemata systems to produce action in association with affect.

Principal XVIII) Law of Conservation of Energy: In any 24-hour circadian cycle there is a fixed quantity of energy to expend across life goals and domains as behaviour, affect and cognitions.

Principal XIX) Programming: The set ranges of all homeostasis systems are programmed by genetics, epigenetics and early life experience.

The 80 empirically falsifiable hypotheses are discussed in other posts in this series on the General Theory of Behaviour. Please drop in again soon.

Welcome to my blog.

4 thoughts on “The General Theory of Behaviour I: First Principles”

This site uses Akismet to reduce spam. Learn how your comment data is processed.